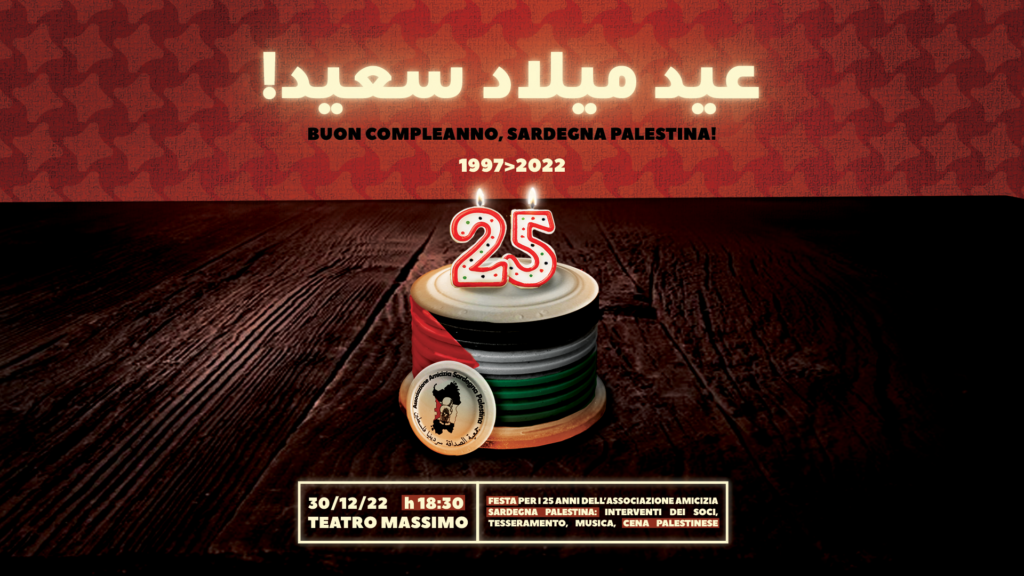 Tuesday, December 20th, 2022 marks the 25th anniversary of our non-profit Association Amicizia Sardegna Palestina, which is known for its political and cultural activity in Sardinia. It’s a good time to reflect on what we have done over the years. Amicizia Sardegna Palestina was founded in December 1997 in Dolianova, Sardinia, and since then it has been involved in a range of cultural and political activities both on the island and further afield.

One of the main focuses of Amicizia Sardegna Palestina has been the organisation of cultural events and activities, such as Al Ard Film Festival (which is about to start its 19th edition), other recurring fests such as “Palestina in Sardegna,” and various literary events and seminars. These events, sometimes in partnership with the University of Cagliari, have brought together intellectuals and scholars from all over the world to discuss important issues and ideas related to the Palestinian people’s struggle for self-determination.

In addition to these cultural efforts, Amicizia Sardegna Palestina has also been involved in political events and protests both in Sardinia and elsewhere. The organisation has worked with local political movements to protest against military bases on the island and the presence of the Israeli Defence Forces for military training and weapons testing.

Finally, Amicizia Sardegna Palestina has participated in international cooperation projects in Palestine and Lebanon, such as “Handala va a Scuola,” “Studenti in Azione,” and “Istruzione contro Povertà.” These projects, carried out in collaboration with local associations, have helped to support education and cultural development, particularly in Palestinian refugee camps.

As Amicizia Sardegna Palestina celebrates its 25th anniversary, it’s clear that the organisation has had a significant impact on the community, both locally and beyond. To mark this milestone, we’re going to meet with all the associates and friends of the association in Cagliari on December 30th, 2022, at the Teatro Massimo. It’s sure to be a celebration of the organisation’s many achievements and a look ahead to all it will accomplish in the future.